Financial Times: Advertising agencies ask ‘where are all the people?’ in battle for talent

Excerpts from the Financial Times on September 9, 2022 by: Alistair Gray

In an industry disrupted by tech, employees have options to seek higher salaries and fulfillment elsewhere

Recent results from several large ad groups show how competition for talent has weighed on bottom lines. Although different companies have different ways of measuring it, the trend for higher salary bills is clear.

Personnel expenses reached €3.89bn in the first half of 2022 at Publicis, the France-based parent of Saatchi & Saatchi and Starcom, a year-on-year rise of 14 percent assuming currencies were constant. Staff costs totalled £3.93bn at WPP, the London-listed owner of Wunderman Thompson and Ogilvy, an increase of 9 percent on the same forex-adjusted basis. 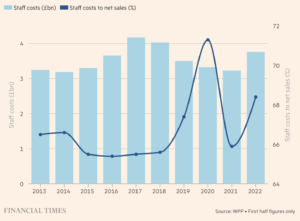 At Interpublic, the US conglomerate behind McCann and MullenLowe, salaries and related expenses rose 10 per cent in the period to $3.15bn. Sir Martin Sorrell’s digitally focused ad company, S4 Capital, issued a profit warning in July, citing hiring and staff costs.

Payroll expenses have risen in part because of the additional freelancers and staffers agencies have hired to capitalise on a resurgence in client demand for advertising since the depths of the coronavirus pandemic.

At Publicis, they rose from 64.4 percent of revenues in the first six months of 2021 to 66.2 percent this year. About two-thirds of employees received at least one salary increase last year, and 35 percent had several. Since the beginning of 2022, 35,000 have received a bonus and 43 percent of the workforce another base pay rise.

All told, double-digit percentage annual pay rises have not been unusual for some ad workers in recent months.

Turnover has long been high in a sector reliant on young employees with a few years’ experience. Yet since the start of the pandemic, such workers have been especially hard to come by. In London, which vies with New York to be the world’s pre-eminent advertising hub, visa complications arising from Brexit have added to the strain.Sorrell said that while pressure on recruitment was “still there” in digital advertising, it was “not as intense” as a few months ago as employers have grown cautious about the global economy.

After big cuts at start of pandemic, agencies in New York have been on hiring spree 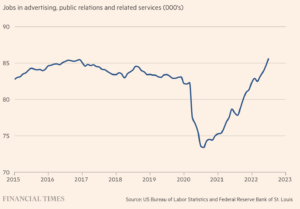 Some analysts said that despite recent shortages, ad companies might need to join tech companies and shed workers — as they did swiftly at the onset of the pandemic — if a slowdown takes hold.

Whatever the short-term trends, however, some in advertising say disruption wrought by the pandemic has only exacerbated deeper employment challenges for agencies. Old faultlines between advertising and other industries have blurred as technology has displaced traditional media, giving staff more options to work elsewhere beyond rival agencies or client marketing departments.

“So many skillsets in our industry now are transferable,” said Victoria Livingstone, chief people officer for Europe, the Middle East and Africa at Japan-based Dentsu, the world’s fifth-largest advertising group. “In the past, if you were losing employees, you were losing them to direct competitors. Replacing people was not the challenge it is now,” she said, although she added that this also meant ad agencies had a bigger talent pool to draw from.

As well as improving pay, agencies are doing their best to address such concerns. Together with a range of initiatives to improve diversity, they are also offering more flexible working, generous parental leave and workplace perks. WPP gave its 109,000 staff a company-wide holiday in July from the evening of Thursday 7 to the morning of Tuesday 12.

Chat with us now!
Back to Our Blogs